After mentioning she had some mild itching at a routine midwife appointment in her first pregnancy, Stacey found out she had ICP, and was asked to come back in the next day for repeat bloods.

‘My symptoms were very mild in my first pregnancy and I didn’t have any at all in my second, but I was diagnosed both times with severe ICP.’

‘It’s all a bit of a blur because it happened so quickly. But I went in, got diagnosed, went home again. And then the next morning, got a call saying I didn’t need to come for repeat bloods anymore, as I had an appointment the next week for another condition – and was told they’d take bloods again then.

‘The doctor who’d told me I had ICP, and that my bile acids were high, hadn’t shown any worry or concern, so I didn’t think much of it. It was only a day later that I noticed that I hadn’t felt my daughter for a while.’ 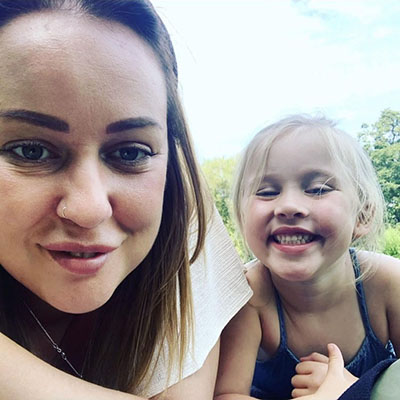 Stacey called the maternity hospital immediately and was asked to come straight in. She was checked by a midwife and again by a consultant, and given the devastating news that her daughter had died.

‘I was induced that day. I don’t really remember much as my emotions took over. I knew I didn’t want to be aware what was happening so was given pethidine. Eliza was born at just after midnight on 19 April 2015, making me 34+2 weeks. She weighed 5lb 4oz and was perfect. I was told I had meconium staining too.’

Stacey got in touch with ICP Support, posting about her experience on the Facebook group and got support from Jenny (the charity’s founder) privately.

‘I was very angry after we lost Eliza. I found it hard to read other women’s stories as my outcome was different to a lot of theirs. Jenny’s emails were very comforting as she was the only one who could give me some sort of answers following our loss. She explained all aspects of the condition to me fully and sent me research papers. She then helped me a lot during my second ICP pregnancy.’

Stacey was diagnosed with ICP again with her second child, this time at 24 weeks. Surprisingly, she experienced no symptoms at all, yet again had extremely high bile acids. Given what had happened in her first pregnancy, she was given daily fetal monitoring from 28 weeks.

‘The doctor who’d told me I had ICP, and that my bile acids were high hadn’t shown any worry or concern, so I didn’t think much of it.’

‘As an added complication, I also had uncontrolled gestational diabetes and was having lots of hypos. The intention was to have a planned c-section at 33+3 weeks. But at 33+1 my bile acids came back at 271. By this time, I was losing my mind with worry as my levels hadn’t been that high when Eliza passed. I had another bile acid test that came back at just below 400 (still with no itching!). With the hypos so out of control as well, I was rushed down for an emergency c-section. Evelyn was born at 33+2 weighing 5lb 3oz, and spent 14 days in Nicu, with no further complications. She was a fighter.

‘My second pregnancy was traumatic too, because of all the worry and being so unwell. But I was grateful to have access to help from ICP Support. Jenny put me in touch with Professor Williamson who is leading the research into ICP in the UK, and having an appointment with her was really helpful. She worked alongside my consultant on my care plan and I knew I was in good hands.’

‘I see it as pot luck as to how much your health professional knows when it comes to ICP. That needs to change.’

Stacey says she is shocked at how little health professionals know about this condition, particularly obstetric consultants and midwives.

‘Quite a few of the midwives I saw knew next to nothing about ICP and some hadn’t even heard of it. I work in dentistry and we have to do continuing professional development. This condition needs to be included as part of that training for all midwives and obstetric doctors. It might be a rare disease but it still affects all of us women and we need better support. I see it as pot luck as to how much your health professional knows when it comes to ICP. That needs to change.’