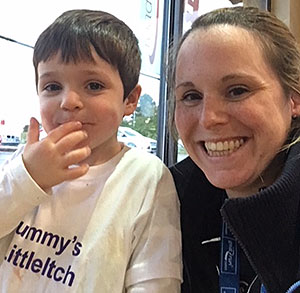 Jenny Hastings was diagnosed with intrahepatic cholestasis of pregnancy (ICP) at 34 weeks when pregnant with her first-born child, George (now five years old). Like thousands of other women across the globe, Jenny had never heard of the condition until diagnosis. Jenny’s experience of ICP’s symptoms were thought to be typical of every pregnancy: ‘I felt like I had flu, run down and really under the weather. I was so shocked I remember bursting into tearsI was itchy, but I just thought that’s just how you felt in pregnancy’. Jenny was under a lot of pressure at work in addition to this, having to oversee an entire department at a large comprehensive school and organise cover for another member of staff. ‘My mum noticed that I had raw skin on my hands and feet; she’d been a nurse previously and knew this could be a sign of something more than just pregnancy itself. I saw my midwife and she did a blood test, which confirmed I had ICP’. Jenny was diagnosed at 32 weeks with her second-born, Phoebe, now 15 months.

‘I was so shocked I remember bursting into tears’, remembers Jenny. ‘I was so scared when we got to the hospital: I had researched the condition briefly and just saw the words “premature” and “stillborn”, which clearly made me feel even more concerned’. Jenny’s first appointment after diagnosis consisted of a heart-rate check-up of the baby, being prescribed some tablets and being sent home with the promise of another appointment being made soon: ‘They were very dismissive, and this did not help with my anxiety’. Jenny describes her hospital experience as ‘not good’, as it was ‘perfectly OK’ to go full-term with the condition, and that further blood tests after diagnosis were not needed. Once I had contacted ICP Support, I pushed for regular blood tests‘Once I had contacted ICP Support, I pushed for regular blood tests’. Research has found that monitoring liver blood tests and bile acids during pregnancy after diagnosis can be crucial when it comes to ensuring the safety of both baby and mother. 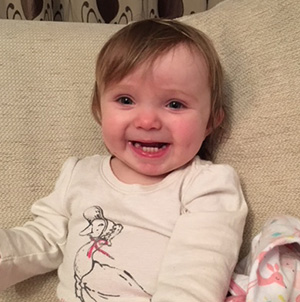 During her pregnancies, Jenny described her hospital experience as ‘highly stressful’: ‘So many midwives seemed unaware [of the condition] and I overheard one of them having to ask what it was. The medical profession need to educate themselves more’. One of ICP Support’s main aims is to raise awareness of the condition by various different means, such as speaking at medical conferences. Advancing public knowledge of the condition is a main priority of the charity to ensure that ‘Every ICP baby is born safely’.

Another challenge faced by Jenny was the diagnosis of ICP being dismissed: ‘My mum was concerned, as she had heard of the condition previously so she was fantastic. However, I remember other family members being fairly dismissive. They hadn’t heard of the condition and I remember them telling me I shouldn’t believe what I read online: they were certain it wasn’t that bad’. People are still seemingly naïve when it comes to ICPJenny recalls her best friend being highly supportive and taking the condition seriously; however, even during her second pregnancy others still felt she was overreacting: ‘People are still seemingly naïve when it comes to ICP and I remember feeling quite silly, even though by then I was involved in the charity and knew much more about the condition’. 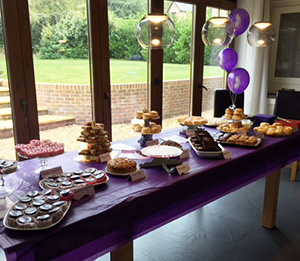 Jenny remembers finding the ICP Support website shortly after diagnosis. ‘I left a message on the support line and received a call back: I talked through all my concerns with Magdalen, who runs the charity’s support and information line, and she helped me realise that my worries weren’t silly; she was amazing. We discussed the best course of action and my options etc. The phone line is an invaluable resource, as I was given such personal advice. During my second pregnancy, I used the Facebook group, where women share ideas on how to cope with symptoms (particularly itching).’ 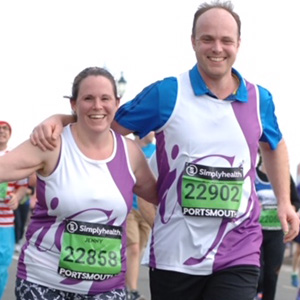 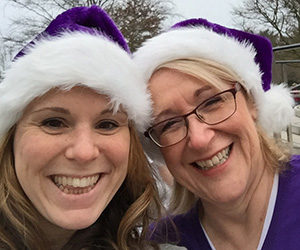 Since her first contact with the charity, Jenny has taken part in ICP research that is being undertaken by Professor Catherine Williamson and facilitated by ICP Support (including BEATS – a heart study – and the Metabolic Profile in ICP & GDM – a feeding study) and raised over £2500 for the charity: ‘So far I have hosted two afternoon teas, and challenged myself to run 500 km in three months, which I managed to finish on Christmas Day with Jenny Chambers (founder and CEO of ICP Support), which was really special’. Jenny is also now an ICP Support Trustee and has taken on the role of ‘Running Manager’, which involves organising all of the running events taken on by supporters of the charity under their campaign ‘Itching to Run’.

Jenny went on to offer her ideas on where raised funds would be best put to use: ‘It [raised money] should go towards enabling this charity to continue to help women and towards research: we need more answers into this condition, as, while I am lucky to have two healthy babies, some women aren’t so lucky. I know there’s also a strong likelihood that Phoebe will suffer with the condition too’. ICP may be passed down through genetics from both the mother and father of a child.

Jenny shares one final piece of advice for potential sufferers: ‘Never ignore an itch. You know your body. Push for tests if you have to’.