ICP is more common in certain populations, including women of South American, Indian and Pakistani origin, and it can also run in families. How we inherit susceptibility to ICP is very complex.

Genes are passed down to us by our biological parents. It may help if you think of genes as many sets of chemical codes that are stored in a large molecule called deoxyribonucleic acid (DNA) and which act as the instructions, or the blueprint, for how to make a living thing. We inherit half of our genes, carried on chromosomes, from one parent and half from the other, and they can determine things like the colour of our eyes, the colour of our hair, whether we can roll our tongues and what colour our skin is. These characteristics are known as traits or phenotypes. 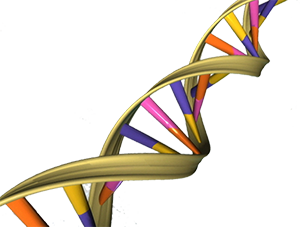 A segment of DNA

Sometimes the code within different genes doesn’t get copied exactly as it should. This means that the instructions are now slightly different. A simple, harmless change of coding (called a variant or a ‘polymorphism’) explains why we have traits like hair colour differences. But sometimes the changes in coding may result in more serious things, such as the condition cystic fibrosis (CF). In CF, scientists can show that this change has only happened at a single point in the coding of one gene.

In ICP, scientists have also shown that a change in the code of one single gene, called the ABCB4 gene, can be found in women with ICP. But (and here’s why ICP is complex) when scientists tested women with ICP for changes in this gene they found that only 10% of them had it. The same has happened with another gene, called ABCB11, but again changes in this gene have only been found in around 5% of women with ICP. They have found further changes in the genetic coding for women with ICP, which they think may be part of the disease, but these still don’t give scientists the whole genetic part of the condition. Are there more? We don’t know, but an exciting new project may help to identify the missing genetic pieces – we’ll let you know when this happens!

We have previously mentioned that we inherit our genes from both of our parents, so It’s possible that the genetic variant for ICP can be passed down by the father as well as the mother. If you’re trying to understand how you may have inherited this susceptibility to the condition, you need to ask both your parents (if that’s possible) about their own family history.