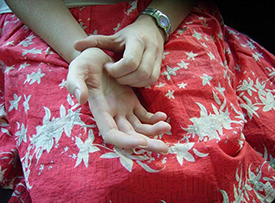 *The study still refers to ICP as obstetric cholestasis (OC) as it was opened in 2008 when OC was the more common term for the condition. Professor Williamson and her group have always published research papers using the term intrahepatic cholestasis of pregnancy (ICP) but recognised that women would know the condition better as obstetric cholestasis, which is why they set the studies up using that term. The name of this study is likely to be changed to ICP at some stage.

Broadly speaking, the aim of the OC Research Study is to better understand the condition. There are a range of objectives that it would like to achieve. Here’s what the protocol says about those objectives.

The aims of this study are to test the following hypotheses:

At the moment the group is only recruiting in the UK. They would like to hear from women who have ICP (or have had it) or women who have, or have had, uncomplicated pregnancies (to act as controls). A control research participant is someone who has not had the condition that is being investigated but who is needed to compare any findings made in those people who are affected by the disease. It ensures that what had been found in the group with the disease are unique and wouldn’t be found in everyone else.

The group is permitted to collect a range of samples that typically include: blood, urine, stool samples, placenta and cord blood (birth samples are always collected after the baby has been born and so cannot harm your baby). You have a choice in what you donate: for example some women might not want to donate cord blood. If you are not having your baby at any of the hospitals mentioned above, a kit can be sent to you in which to collect the samples. Collecting data about your pregnacy(ies) without collecting any samples will also be very valuable to the research team. Jenny will give you more information about how this works if you contact her.

If you are over 18 and think you may be interested in taking part have a look at the information sheets and then contact Jenny Chambers (jennychambers@icpsupport.org). Contacting Jenny does not commit you to taking part; nor does it commit the hospitals to including you in the study.