Fiona was diagnosed with intrahepatic cholestasis of pregnancy on Christmas Eve 2010, when she was just 18 weeks pregnant.

‘I was a student in Liverpool at the time, and had gone to mum and dad’s for the Christmas break, when I realised something wasn’t right. 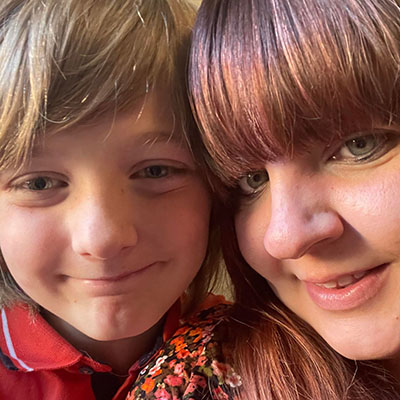 ‘I’d been itchy for about week, but it was quite mild. And then it suddenly got a lot worse and I was bleeding too, so I went to the local hospital.

‘They ran a bile acid test and thankfully it didn’t take long for the results to come back, and I was started on Urso.’

Fiona was (and is) a single parent, so was dealing with her ICP diagnosis without a partner, but with support from her parents and housemates she managed to go back to university and lectures for a few weeks, until the itch ramped up again.

‘It got to the point where I couldn’t sleep at night and was having showers and baths at 2 a.m. to cope. I had also started turning yellow, which is another less common ICP symptom!’

‘I think there’s still this misconception ICP is something you can only get in your third trimester. But with some women, it starts a lot earlier. And I was one of those women.’

By February (when Fiona was about 24 weeks), she was admitted as an in-patient, and the doctors took the decision to induce her at 32 weeks because of her very high bile acid levels.

‘That was the plan, but my son had other ideas: he was born of his own accord at 31 weeks 4 days. It was extremely quick but thankfully I was in hospital, and he was able to come home with me after just four weeks in Nicu.’

It was actually Fiona’s dad who came across ICP Support when he was looking online for information and found the website and links to reports useful.

‘I’ve had a lot of support from them since too’, adds Fiona, ‘as I still have raised liver function levels and the occasional itch 10 years on.

‘I bang on about it all the time, to make sure anyone I know who’s pregnant knows to get an itch checked.’

‘Jenny Chambers has been great, offering me advice and putting me in touch with her research colleagues in London to try and work out what’s going on, but for now we’re just keeping an eye on things and doing regular tests.’

Fiona is keen to spread the word about itching in pregnancy. ‘A lot of people think it’s nothing to worry about. But I bang on about it all the time, to make sure anyone I know who’s pregnant knows to get an itch checked.

‘And health professionals need to take you seriously if you present with symptoms early in pregnancy. It can happen before the third trimester. It did with me.’