Research into ICP has overturned many previous beliefs about the condition. On this page we list two common misconceptions.

It’s true that ICP most commonly presents late in pregnancy, but it can be diagnosed as early as 8–9 weeks. See, for example:

Myth: The itch only occurs on the hands and feet

In fact, itching in ICP can occur anywhere on the body. ICP Support conducted a survey of over 500 women who had been diagnosed with ICP, asking them where on their body they itched. The results are shown in the image below. 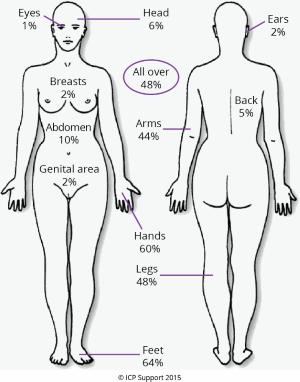 This image is also available as a high-resolution PDF: Download

As you can see, while the hands and feet are the most common locations for the itching, the arms and legs are also very often affected. Almost half of women report itching all over the body, while others report specific locations elsewhere.

In a follow-up survey we also asked women to tell us on which single part of the body the itching was most intense. Here are the results.

This image is also available as a high-resolution PDF: Download

Here you can see that the worst areas for itching are the feet and legs.