Not being happy with some of her treatment in her first ICP pregnancy, Louise chose to work with an independent midwife in her next two.

‘The condition itself was manageable. It was how we were treated that was the difficult bit.’

‘Some of the treatment we received first time round was downright awful. The health professionals dismissed my itch to begin with. They told me it was dry skin and to keep myself moisturised. Thankfully I did my own reading and realised that it could be something related to my liver. But when I went to my GP to ask about it a second time, again he was really dismissive. After two weeks of intense itching, I was finally booked in for a blood test and diagnosed at 29 weeks.’ 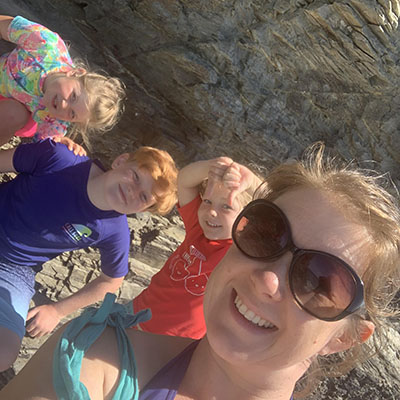 Louise describes her first hospital visit as being particularly traumatic.

‘I was teaching at the time and came out of a staff meeting to see I had nine missed calls from a locum doctor, with a message telling me to go straight to hospital with an overnight bag, as they’d had my bloods back. I was in a proper panic and when I got to the hospital no one knew anything about it and I was told to wait. It was 2010 so you couldn’t get Google on your phone, so just remember sitting there in the waiting room, jumping to conclusions and not being given any info. I was eventually given some Urso and a letter for my GP and sent home. None of my questions were answered. I was just thrown into this awful, panicked situation.’

Thankfully Louise was then given a treatment plan, which included weekly bloods and a scan every other week, and these took place at a different hospital, where the treatment was a lot better.

‘Before we had Seb, I felt really well looked after in the second hospital. I looked forward to each Wednesday because it meant I got to see the baby on the scan. And I took different members of my family with me each time. They were all quite worried, so that was a good way to reassure them. Unfortunately after Seb was born, I didn’t rate the treatment quite as much. Seb was born at 34+4 with no issues, but we were very much treated like he was a poorly baby. He had to go to Nicu and be wired up in an incubator because there weren’t enough beds in Transitional Care. That was really unnecessary and distressing for us.’

Louise’s mixed experiences of the hospital care she received led to her seeking out a 1–1 midwife for her next pregnancy. She then paid to use her again privately for her home birth with her third child.

‘The 1–1 midwife was great. It’s like having an independent midwife, someone who can advocate for you and knows exactly what you want. My second baby was born breech and the midwife helped us fight against unnecessary interventions. My third child was born at home as planned, although we then transferred in, due to a retained placenta. All three were born safely.’

‘Although I had it in every one of my pregnancies, it wouldn’t put me off having another child if I wanted one.’

Despite having gone through ICP three times, Louise talks about it being a manageable condition, as something that was difficult but not life-changing.

‘Although I had it in every one of my pregnancies, it wouldn’t put me off having another child if I wanted one. It didn’t limit us in how many children we wanted to have. The difficult part was the hospital treatment. Professionals not knowing enough about the condition. Being dismissed and not taken seriously. It’s been one extreme or the other – either unnecessary interventions and overly cautious measures, or being dismissed and made to feel silly.’

‘For me the main bit of work that needs to happen now is educating healthcare professionals about this, particularly doctors. There’s also a lot of work to be done on how women with ICP are treated.’

‘My advice to anyone going through it is to make sure you’re informed so that you can fight for yourself and your baby, and push for regular blood tests. And if you need help advocating for yourself, or need the most up-to-date information to give to your doctors, talk to ICP Support. You don’t have to be alone with this. Access the Facebook group, refer to the website – arm yourself with the facts and tap into the support, and you will get through it.’